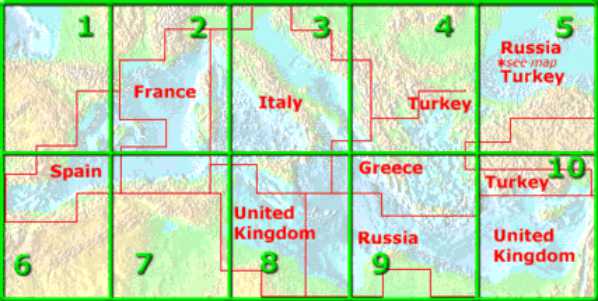 The International Bathymetric Chart of the Mediterranean (IBCM) is an intergovernmental project to produce regional-scale bathymetric maps and data sets, together with geological/ geophysical overlays, of the Mediterranean Region including the Black Sea. Sponsorship of the IBCM project comes from the Intergovernmental Oceanographic Commission (IOC), a branch of UNESCO. The International Hydrographic Organization (IHO) also maintains a strong interest in the project.

Participating countries have included Spain, France, Italy, Greece, Turkey, Israel, Germany, and Russia. Publication of each of the IBCM maps in paper form has been accomplished by the Head Department of Navigation and Oceanography of the Russian Navy. The President of the Editorial Board is Prof. Carlo Morelli of Italy. The vice-presidents of the Board are Dr. John K. Hall of Israel and Ing. Gen. Patrick Souquière of France.

IBCM is the oldest and most established project of its kind, having been initially proposed to IOC in 1972. The first meeting of the Group of Experts on Bathymetric Charts of the Mediterranean was held in Monaco in 1974. After five meetings of this group, it was reconstituted into the IOC Editorial Board for the IBCM. The first meeting of this group was held in Monaco in 1979, and Editorial Board meetings have been held periodically since that date. The eighth meeting was held in Kaliningrad, Russia, in September of 1999.

Technical specifications were established by the Editorial Board for: data collection; compilation of bathymetric contours; map scales and projections; and product design. These specifications have evolved with advancing technology, but they have always had as their objective coordination and interchangeability with the IOC- and IHO- sponsored General Bathymetric Chart of the Oceans (GEBCO). Later, other IOC-sponsored regional ocean mapping projects have patterned their specifications after those of the IBCM.

In 1981 the completed, 10-sheet, scale 1:1,000,000, first edition of the Bathymetric Map of the Mediterranean was printed by the Head Department of Navigation and Oceanography of the former Soviet Union. In 1987, a smaller, single-sheet version of the bathymetry was printed and published at a scale of 1:5,000,000. A digital data set describing the bathymetric contours was completed by a private organization about 1987; this product has since become available in the international public domain.

A more complete history of the bathymetric mapping, and a report on its progress as of 1987, was published in 1988 by IOC in the IBCM supporting volume.

Upon completion of the bathymetry, first edition, the attention and energies of the IBCM project were refocused on compilation and ultimate publication of a companion series of geological and geophysical maps. A subsidiary group was formed, the Disciplinary Group on the IBCM Overlay Sheets in Marine Geology & Geophysics, which first met in Cagliari in 1980. It was decided that IBCM would pursue production of overlay maps depicting gravity anomalies, earth magnetism, seismicity, recent sedimentation, and Plio-Quaternary sediment thickness.

Work proceeded on these maps; the Bouguer anomaly series of maps and the Seismicity series of maps were completed and published in 1988 and 1989, and subsequently, other maps in the series have been completed and published. Latest in the series are maps of bottom sediment types, which were printed in 1998, and maps of magnetic anomalies which have been planned for printing within 1999. Examples of several of these maps appear in the pages of this website.

Copies of the digital bathymetric contour data base are incorporated into the GEBCO Digital Atlas, available from the British Oceanographic Data Centre.

The next major achievement of IBCM should be a CD-Rom containing all available digital bathymetry for the Medditerranean and Black Seas, as gridded data sets. The grid size has been targetted to 0.1'. This CD would form the second edition of IBCM-Bathymetry.

To be added at a later date.

Find out about products from the IBCM