The latest release of Google Earth uses the GEBCO_08 grid to model the shape of the seafloor. Since its launch, there has been intense interest in the ridges, seamounts and trenches shown and even suggestions that the legendary lost city of Atlantis has been found!

It is true that we have better topographic maps of Mars, Venus and Earth's Moon than we do of Earth's ocean floor. The Mars maps are 250 times more accurate, for example. The oceans are vast and actual measurements of their depths are few, especially in the deep ocean basins.

The GEBCO_08 Grid has been generated by combining measured depth data (collected by ships) with satellite-derived depth estimates in regions where measured data are not available. In general, the data sets blend well together.

However in some areas, for example the Maderia Basin, this is not always the case. What you are seeing in these areas is a broad background of estimated depth with specific measured soundings along survey lines appearing as intersecting, criss-crossing lines. The two don't blend exactly because the survey lines can show more detail. 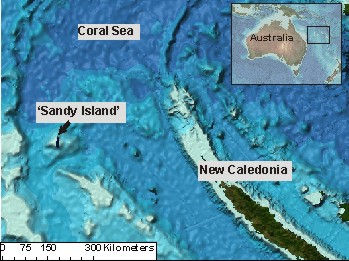 A recent scientific cruise in the South Pacific Ocean has reported that "Sandy Island" does not exist. 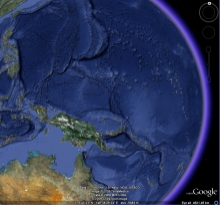 GEBCO's recently released 30 arc-second global bathymetric grid, the GEBCO_08 Grid, has been used as a foundation layer in Google Earth 5.0.