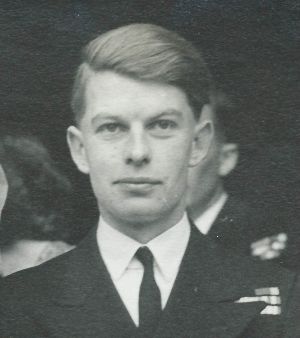 Desmond Scott passed away in May 2015 at the age of 92. The GEBCO community would like to express its sadness at this news and also to celebrate and record Desmond’s contribution to GEBCO.

After a 30-year career in the Hydrographic Surveying Service of the British Royal Navy, Desmond was appointed as Executive Secretary of the Intergovernmental Oceanographic Commission (IOC) of UNESCO in 1972. In this role, he was active in the re-structuring of the GEBCO organisation in 1973 to become a collaborative body under the joint auspices of the International Hydrographic Organisation (IHO) and IOC.

From its early years at the beginning of the 20th Century GEBCO had been producing charts of the global ocean floor. From 1903 to the early 1970s, four editions were produced but by this time it was running into problems with funding, low sales, frequency of updates and the lack of scientific input to the charts.

The IOC asked the Scientific Committee on Ocean Research (SCOR) to set up a working group (WG41), chaired by Tony Laughton, to examine all series of world bathymetric charts. This group made recommendations for a new series of GEBCO charts to be developed jointly by scientists and hydrographers.

As Secretary of IOC Desmond negotiated with his friend and colleague, Admiral Steve Ritchie, who was President of the Directing Committee of the IHB (International Hydrographic Bureau) at this time, to replace the existing GEBCO with one run under both IOC and IHO, thereby bringing scientists and hydrographers together. The Joint IOC-IHO Guiding Committee for GEBCO was established in November 1973.

Desmond became Permanent Secretary to this newly-structured GEBCO, a role he continued long after he had retired from the IOC. Under this new structure GEBCO flourished, with oceanographers and hydrographers working together, and grew to what it is today.

The GEBCO Guiding Committee meets once a year in different countries with the aim of building on and strengthening collaborations and collecting bathymetric data worldwide. In an age before the wide use of the internet, Desmond was masterly in negotiating with governments to gain access to data from their scientific and hydrographic surveying communities.

As Permanent Secretary he was meticulous in keeping and writing up minutes of meetings. His administrative experience in the IOC was invaluable.

Desmond remained Permanent Secretary of GEBCO until 1995. He kept closely in touch with the charting community and was especially active in promoting and publishing the global atlas of geology and geophysics for the Pacific and Atlantic (GAPA), published in the former USSR through Dr Gleb Udintsev of the Vernadsky Institute of Geochemistry, Moscow.

He was active in the work of the GEBCO Sub-Committee on Undersea Feature Names (SCUFN) from the 1980s to 2003 and in the work of the committee developing the International Bathymetric Chart of the Mediterranean (IBCM). Desmond was involved in organising the celebration of the 100th anniversary of GEBCO in 2003 held in Monaco and jointly organised and edited as well as contributing to the "History of GEBCO" book, covering the first 100 years of GEBCO.

Desmond contributed extensively to the field of oceanography through his many roles and the groups he was involved with. The recognition of this by the award of an honorary doctorate from the Russian Academy of Sciences in 2010 was widely welcomed and richly deserved.

Desmond was instrumental in the birth of the present-day GEBCO and in helping to bring the baby up to a distinguished adult. 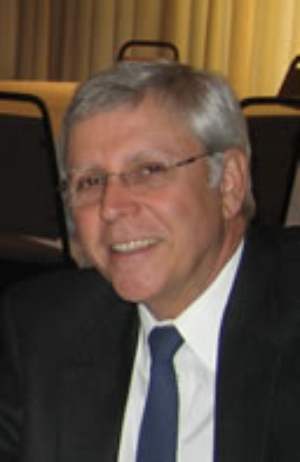 The GEBCO community would like to express its thanks and appreciation to Dave Clark for all his work for GEBCO as he retires from the role of GEBCO Permanent Secretary. 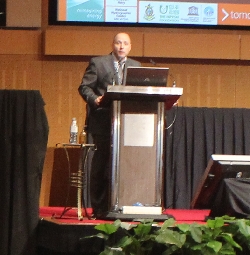 Thanks to Dr Paul Elmore, our Science Day Convener

The GEBCO community would like to express its thanks and gratitude to Dr. Paul Elmore for his contribution to GEBCO by organising and convening GEBCO Science Day since 2012.