In memory of Robert Anderson

Sadly, the ocean mapping community lost a passionate and knowledgeable colleague on Monday, November 4, 2019 as Robert Anderson (better known as Bob) passed away. Bob had participated as an active member in GEBCO for almost 30 years, championing the global acquisition of seafloor mapping data, serving as mentor for the younger generation, and working on numerous outreach projects with the goal of showing the need for mapping the world oceans for the benefit of mankind. 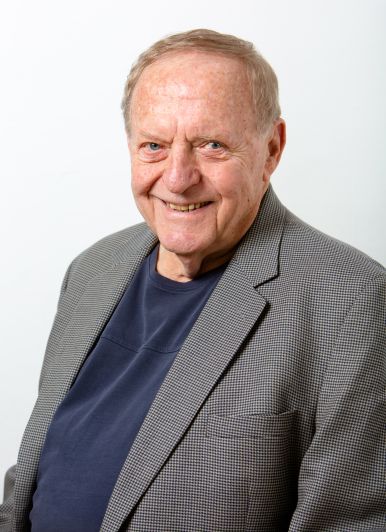 Bob’s contributions to ocean mapping go far beyond his association with GEBCO. He was an adept acoustician, who was quick to see the potential for new instrumentation to solve science and US Navy operational problems. With a background in mathematics, he began his professional career at the US Navy Electronics Laboratory (NEL) in the early 1960s. At NEL, he worked with Dr Waldo Lyon on the scientific exploration of the Arctic Ocean Basin from submarines under the pack ice. Waldo came to Bob and his two close colleagues Rod McLennan and Bob Vachon and said they needed a new active sonar for secure piloting of submarines under ice. Together with his colleagues, he developed what became known as APEX (Arctic Pulse Experimental) sonar, which revolutionized under-ice submarine operations. The APEX sonar was patented and the group of three colleagues received the Vice Admiral Harold G. Bowen Award in recognition of their invention.

In 1980, Bob was transferred to the US Navy’s Arctic Submarine Laboratory (ASL) that was founded by Waldo years earlier. He became the lab’s Technical Director in 1993, a position he retained until his retirement in 2000. After retirement, Bob relocated to the Pacific Northwest but kept deeply immersed in the seafloor mapping community. He was present and provided input at many GEBCO functions as well as IHO/IOC symposia.

Bob was instrumental in the release of bathymetric data from US nuclear submarines that had transited under the Arctic pack ice. He supported George Newton, Chairman of the US Arctic Research Commission, in getting classified data collected from 1957-1982 submarine under-ice cruises declassified and released in 1999. These data were provided to the then newly-formed International Bathymetric Chart of the Arctic Ocean (IBCAO) project. It was truly a new turning point for Arctic Ocean mapping and Arctic Ocean science leading to the publication by IBCAO of the first gridded compilation in 2000 of the Arctic, largely based on the submarine data in the deep central basin. Bob shepherded additional releases of submarine data that were provided to subsequent versions of IBCAO.

Through his position at ASL, Bob helped make unclassified science cruises on US Navy fast-attack submarines both possible and productive. The program for Scientific Ice Expeditions (SCICEX), which supported US academic scientists to sail aboard US nuclear submarines in the Arctic, collected unique geophysical and oceanographic data sets during a period when there was very limited access to icebreakers. He was also instrumental in developing the Seafloor Characterization and Mapping Pods that put the first swath mapping and chirp sub-bottom profiler on a US nuclear submarine. These data, collected over the major bathymetric features in the Arctic Ocean (e.g. Gakkel Ridge and Lomonosov Ridge), supported the first dredging of the Gakkel Ridge, which documented the unusual characteristics of this ultra-slow spreading ridge and help enable the first scientific ocean drilling in the Arctic Ocean.

The release of Arctic submarine bathymetric data from operational cruises and from SCICEX was truly a game-changer! Never before had so much mapping data been available from that poorly mapped region. All of a sudden, details that had never before been seen, appeared on published maps; among them groundings of ice shelves from former glaciations in the central Arctic Ocean at depths of one km. Bob was also intimately involved in efforts to develop echo-sounder buoys for use on drifting pack-ice.

Bob’s passion for passing his understanding of the ocean on to future generations was reflected in his ongoing membership in the sub-committee which annually reviewed the Nippon Foundation /GEBCO training program held at the Center for Coastal and Ocean Mapping, University of New Hampshire. He followed this up by making his knowledge and wisdom accessible to alumni from the training program long after their year in New Hampshire. His experience made him one of the first advisors for the GEBCO-Nippon Foundation Alumni team during the Shell Ocean Discovery XPrize challenge and the team’s success in winning the prize was certainly, in part, due to the significant role played by Bob.

Bob had a passion for showing others the beauty of maps. He came up with the idea of putting the newly created Arctic IBCAO map on an umbrella, and impatiently waited as the first samples were produced. After the first manufacturing run was exhausted, Bob continued to work with the editors of the IBCAO map to revise several flaws in the map presentation on the original umbrella and produced a second version, which was also received with overwhelming praise. Bob then produced a South Polar umbrella from existing maps, which also was quickly distributed and became a collectors’ item. Then came large globes (62 cm) depicting global depths at a resolution never seen before. There were problems with getting the colors and labels right with the producers in China, but Bob never gave up. Instead he befriended the manufacturer in China and went there to ensure they did it right – which of course, under his supervision, they did.

His latest quest was for smaller, more affordable globes that showed our planet’s relief in 3-D and that could be widely distributed to classrooms around the world. Unfortunately, that task is unfinished but the GEBCO community has vowed to see it to completion. While Bob’s passing has saddened us all, we are consoled by the fact that his last days were spent with the community he so loved, pursuing his vision of bringing the wonders of mapping the ocean to all.

The family has requested that memorial contributions can be made to the University of New Hampshire Foundation for the: Bob Anderson GEBCO Scholarship Fund.

Please contact the Nippon Foundation-GEBCO Seabed 2030 Global Center () for details on how to contribute.