The GEBCO_08 Grid is a 30 arc-second interval global terrain model and was first released in January 2009 and updated in November 2009. The grid has been generated by combining quality-controlled ship depth soundings, with predicted depths between the sounding points guided by satellite-derived gravity data.

To accompany the GEBCO_08 Grid a ‘source identifier’ (SID) grid is now available to download from the British Oceanographic Data Centre (BODC).

This is a ‘metadata data set’ that identifies which grid cells in the GEBCO_08 Grid are based on bathymetric soundings or bathymetric depth values from grids and which cells contain predicted depth values.

For future releases, it is planned that the SID grid will contain an identifier code, which will identify the individual surveys and data sets used to generate the grid. 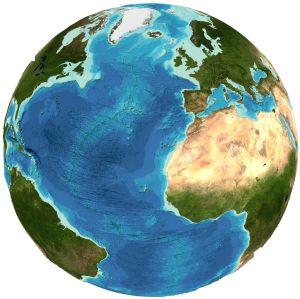 The GEBCO_08 Grid is now available as a Web Map Service (WMS). A means of accessing geo-referenced map images via the internet.