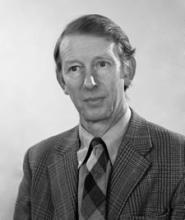 It is with great sadness that we have learnt that Sir Anthony Laughton FRS died in September 2019 at the age of 92. The GEBCO community would like to express its sadness at this news and also to celebrate Tony’s contribution to GEBCO.

Tony was one of the founders of the modern GEBCO in 1974 when it came under the umbrella of the International Hydrographic Organization and the Intergovernmental Oceanographic Commission.

He was co-author of the first sheet, published in 1975, of the GEBCO 5th Edition chart series that are still famous on many walls of oceanographic institutions around the world. He chaired the committee for the GEBCO 100th year celebration in 2003 and finished his 17 year term as chair of GEBCO that year.