London, UK, 7 March, 2018 : The GEBCO-Nippon Foundation Alumni Team has progressed to the final round of the Shell Ocean Discovery XPRIZE, a global competition challenging teams to advance deep-sea technologies for ocean floor exploration. Of the 19 teams that competed in the November 2017 semi-final, only nine have progressed to the final round. The finalists will be formally recognized and awarded at Oceanology International's Catch the Next Wave conference in London on March 15.


The GEBCO-NF Alumni Team is led by alumni of The Nippon Foundation / General Bathymetric Chart of the Oceans (GEBCO) Postgraduate Certificate in Ocean Bathymetry Training Programme, run at the Center for Coastal and Ocean Mapping at the University of New Hampshire. The GEBCO-NF Alumni Team's successful concept utilises a KONGSBERG HUGIN Autonomous Underwater Vehicle (AUV) supported by the SEA-KIT™ unmanned surface vessel, USV Maxlimer. The SEA-KIT™ vessel has been built by Hushcraft in the UK, and has the unique ability to autonomously launch and recover the AUV. The surface vessel acts as an active communication link during subsea survey operations. The seafloor data collected by the AUV, is then consumed into a semi-autonomous workflow allowing the on-shore analysts to process it into bathymetric maps and images of the surveyed area. The autonomous navigation and AUV tracking capabilities of the USV are possible - thanks to support from KONGSBERG Maritime to the team.

The HUGIN AUV, 'Chercheur', deployed by the SEA-KIT™ USV, is owned and operated by Ocean Floor Geophysics (OFG). It is one of the best equipped survey and pipeline inspection AUVs in the world, with technology including HISAS interferometric synthetic aperture sonar, multibeam echosounder, and a state-of-the-art positioning system.

The team's system brings significant potential benefits over traditional mapping missions using multibeam echosounder technology. Such systems typically require large research ships with full scientific crews on board, resulting in costs of tens of thousands of US dollars per day. The USV/AUV model has demonstrated that high-quality bathymetric data can be obtained inexpensively with little, to no human involvement at sea.

Commenting on the team's progression to the final, Dr Rochelle Wigley, Project Coordinator, noted: "This announcement is an acknowledgement of the investment that The Nippon Foundation has made in building capacity in global ocean mapping, and reflects the education the team received from the Center for Coastal and Ocean Mapping at the University of New Hampshire. The Shell Ocean Discovery XPRIZE has provided a platform for our alumni to showcase their skillset to the world. I would like to acknowledge all our partners, with special thanks to Kongsberg Maritime and Ocean Floor Geophysics. Their support was crucial to the alumni learning experience, without which we could not have progressed to the final round".

The announcement comes just two weeks after The Nippon Foundation–GEBCO Seabed 2030 Project, which aims to map the entirety of the world’s ocean floor by 2030, became operational. The project will make a significant contribution to the UN's Sustainable Development Goal 14: ‘to conserve and sustainably use the oceans, seas and marine resources for sustainable development’.

Highlighting the potential for the Alumni Team to assist Seabed 2030, Dr Wigley said: “We have always maintained that the development of new technology will be a game changer for achieving the goals of The Nippon Foundation-GEBCO Seabed 2030 project. This is our ultimate objective beyond the Shell Ocean Discovery XPRIZE. The concept we have developed allows high-resolution bathymetry and imagery data to be collected remotely and at significantly reduced costs, thereby advancing the cause of science. This will allow human resources to focus on other aspects of data collection, collation and product development”. The alumni-led data processing pipeline developed with input from Teledyne CARIS, OceanAero and Earth Analytic, allows the team to easily produce understandable and useful information from data, which is an important component of Seabed 2030.

Individual components of the team’s system are already commercially viable and the team’s technology has potential for wider use in the maritime sector. For instance, it can be used for monitoring cables and pipelines, piers, dredging operations and ocean survey work. The team is starting to explore these potential opportunities as they prepare for round 2.

Requirements for the final round of the Shell Ocean Discovery XPRIZE are expected to be announced shortly.

For more information on the GEBCO-NF Alumni Team, contact: 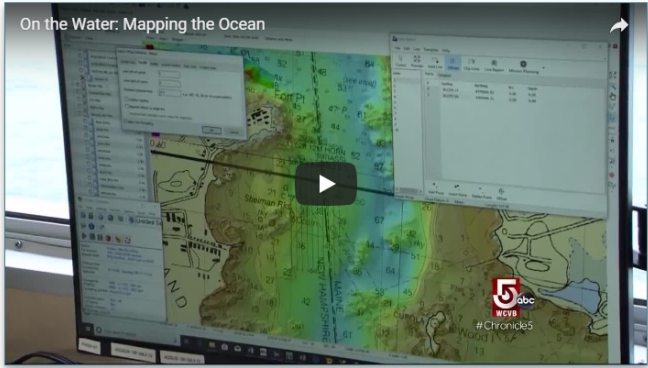 Year 14 students of the Nippon Foundation – GEBCO Training Programme at the University of New Hampshire recently took part in a news story on the Chronicle news programme of WCVB-TV Channel 5, Boston, USA – highlighting the need to better map our global ocean floor.

Applications are now sought for entry onto the Nippon Foundation/GEBCO Training Programme in 2018. The 12-month course, leading to a Postgraduate Certificate in Ocean Bathymetry (PCOB), is held at the University of New Hampshire, USA