The GEBCO chart series has its origins at the beginning of the 20th Century. Find out more about the development of GEBCO from its initiation by Prince Albert I of Monaco in 1903 to the present day.


To celebrate the initiation of the first GEBCO chart series, the GEBCO Centenary Conference was held in 2003. The History of GEBCO, 1903-2003 book was also released to coincide with this anniversary.

In June 2016 the Forum for Future Ocean Floor Mapping was held in Monaco with the aim of developing a roadmap for future ocean mapping work.

Find out more about why and how we map the seafloor from our frequently asked questions page.

GEBCO's early years and development of its paper chart series 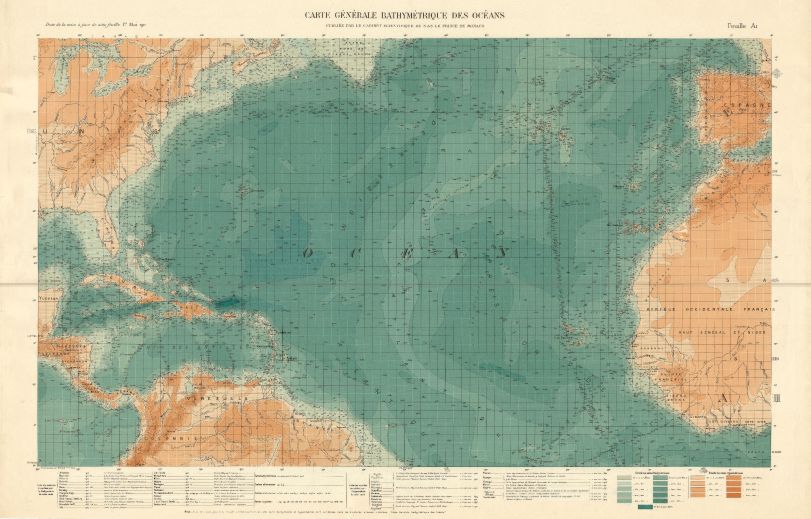 Soundings and contour lines first appeared on European charts during the 16th century. Bathymetric contour charts became more frequently produced from the middle of the 19th Century onwards. However, due to the lack of an international agreement, the nomenclature and terminology used on the charts was not standardised.

Consequently, the 7th International Geographic Congress (Berlin, 1899) nominated a Commission on sub-oceanic nomenclature, which was also responsible for the publication of a general bathymetric chart. The Commission convened in Wiesbaden (April 15-16, 1903), with Prince Albert I of Monaco in the chair, and adopted the characteristics defined in a memorandum by J. Thoulet. The 24 sheets of Carte générale bathymétrique des océans printed in Paris in 1905, hastily prepared, were harshly criticised by E. de Margerie.

Immediately Prince Albert decided that a new edition should be made for which a second commission convened in Monaco (1910). The second edition was printed from 1912 to 1931 with contour lines representing the terrestrial relief and a revised nomenclature. The use of sonic and ultrasonic devices increased the amount of data tremendously. The responsibility of the Chart was then transferred to an international organisation: the International Hydrographic Bureau.

For the third and fourth editions there was a major change in organisation. Following the death of Prince Albert, his scientific team was disbanded and the International Hydrographic Bureau was invited to take over the project. Again delays were caused by war and by 1972 only certain sheets of these editions had been published.

Following recommendations by the Scientific Committee on Oceanic Research (SCOR), it was then decided to modernize the whole series and bring in the expertise of the scientific community to meet the needs of present day users. The Intergovernmental Oceanographic Commission (IOC) of UNESCO was invited to cosponsor a 5th Edition, and strong support was provided by the Canadian government. With this structure in hand, the GEBCO Guiding Committee was in a position to offer marine geoscientists in many countries of the world the possibility of publishing their work in a prestigious chart series of high quality. World coverage on the original scale of 1:10 million was completed and published by 1982, followed by a small scale world sheet in 1984.

Find out more from the History of GEBCO Book and Centenary Conference presentations.

The start of the digital era — the GEBCO Digital Atlas

Due to the succes of the 5th Edition GEBCO chart series there was considerable support for GEBCO's work, and in 1994 the GEBCO Digital Atlas (GDA) on CD-ROM was published. The first release of the GDA was produced by digitising the bathymetric contours, coastline and shiptracks from the printed sheets of the 5th Edition. It represented the first seamless, high-quality, digital bathymetric contour chart of the world's oceans and provided the base for the regular updating of GEBCO at that time. A second release was published in 1997.

The last release of the GDA as a CD-ROM/DVD product was in 2015. GEBCO's data sets are now available to download directly online.

Recognising the importance of the availability of gridded bathymetric data sets for applications such as ocean modelling work, GEBCO released its first global bathymetric grid, the GEBCO One Minute Grid, in 2003. This data set is at one arc-minute intervals and is largely based on the bathymetric contours contained within the GEBCO Digital Atlas.

In 2009, GEBCO released the GEBCO_08 Grid a global grid at 30 arc-second intervals. The grid was generated by combining quality-controlled ship depth soundings with interpolation between sounding points guided by satellite derived gravity data. Updated versions of the grid were released in 2010 and 2014.

Seabed 2030 was launched in June 2017 with aim to facilitate the complete mapping of the global ocean floor by the year 2030.

In the opening address of the Forum for Future Ocean Floor Mapping in 2016, Mr. Sasakawa, Chairman of The Nippon Foundation, set forth the initiative to partner with GEBCO to cooperatively work towards mapping 100% of the topography of the World Ocean floor by 2030.

This initiative led to the formulation of Seabed 2030, a global project within the IHO-IOC GEBCO framework with the focused goal of producing the definitive, high-resolution bathymetric map of the entire World Ocean.

This ambitious initiative is driven by a strong motivation to empower the world to make policy decisions, use the ocean sustainably and undertake scientific research based on detailed bathymetric information of the Earth’s seabed.

We have been funded by the Nippon Foundation, based in Tokyo, Japan, to train a new generation of ocean bathymetrists through the Postgraduate Certificate in Ocean Bathymetry (PCOB) at the University of New Hampshire (UNH), USA.