Members of the GEBCO-NF Alumni Team, winners of the four million dollar Shell Ocean Discovery XPRIZE in May this year, recently met with the Japanese Prime Minister, Shinzo Abe, in Tokyo to discuss their winning entry from this international seafloor mapping challenge.

Team member, Karolina Zwolak, spoke with the Prime Minister about the technology they developed for the competition, and used replicas of the vessels and 3D visualizations of the data collected during the competition to explain their design.

The team was introduced to the Prime Minister by Yohei Sasakawa, the Chairman of The Nippon Foundation, which backed the team's entry, and Mitsuyuki Unno, executive director of the Ocean Affairs division at The Nippon Foundation. Also present at the meeting with the PM were the Japanese team, Team Kuroshio, that came second in the XPRIZE competition.

The GEBCO-NF Alumni Team presented the PM with a gift of a framed copy of the General Bathymetric Chart of the Oceans (GEBCO) 2019 – the most recent version of the definitive map of the world's ocean floor, compiled through the framework of The Nippon Foundation-GEBCO Seabed 2030 Project.

The GEBCO-NF Alumni Team's entry won against competion from around the world. Its entry utilised the SEA-KIT Uncrewed Surface Vessel (USV) Maxlimer, alongside the Kongsberg Maritime HUGIN Autonomous Underwater Vehicle (AUV) System. The team’s concept for efficient, safe and cost-effective seafloor mapping was based around the Kongsberg Maritime HUGIN AUV, rated to operate at depths of up to 4,500 metres, supported by the SEA-KIT USV, which has the ability to autonomously launch and recover the AUV and acts as a communication link during subsea survey operations.

The Team includes 16 alumni of The Nippon Foundation-GEBCO Training Program, held at the University of New Hampshire, USA since 2004. This 12-month course leads to a Postgraduate Certificate in Ocean Bathymetry. To date the course has trained 96 students representing 43 countries, helping to strengthen GEBCO's links around the world.

About GEBCO and the Nippon Foundation-GEBCO Seabed 2030 Project

GEBCO's aim is to provide the most authoritative publicly-available bathymetry of the world's oceans. Our latest bathymetric product is a global grid at 15 arc-second intervals. This is GEBCO's first product produced through the framework of the Nippon Foundation-GEBCO Seabed 2030 project.

Seabed 2030 is a collaborative project between the Nippon Foundation of Japan and GEBCO. It aims to bring together all available bathymetric data to produce the definitive map of the world ocean floor by 2030 and make it available to all. Find out more and get involved. 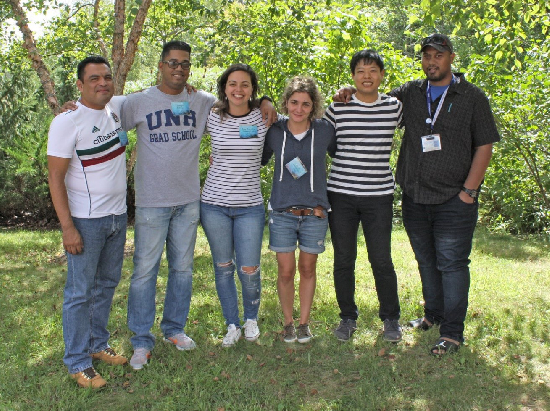 Welcome to the Year 16 Class of our Training Program