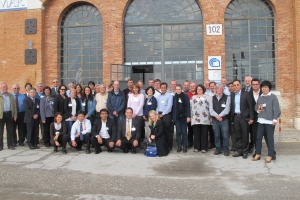 At the recent GEBCO meetings hosted by the Instituto di Scienze Marine (ISMAR) in Venice, Italy there were a number of changes to the membership of and posts held in some of GEBCO's Committees and Working Groups. Find out more about the leadership changes to these groups.

The GEBCO community is pleased to announce that Vice Admiral Shin Tani (Chief Hydrographer of Japan) has been appointed as the new Chair of the Joint IHO-IOC Guiding Committee for GEBCO and Prof Martin Jakobsson (Head, Dept. of Geological Sciences, University of Stockholm) as the Vice Chair.

Shin and Martin have made major contributions to GEBCO's work and activities over a number of years and we welcome them in their new roles.

The previous Chair, Dr Robin Falconer, has stepped down after serving for four years in the role. GEBCO colleagues extend their gratitude to Robin for his guidance and leadership and are pleased that he will continue to serve on the Guiding Committee. We also gratefully acknowledge the contribution of Dr Chris Fox (Former Director of the US National Geophysical Data Center (NGDC), retired) as GEBCO Vice Chair until December 2012.

Dr Karen Marks (US NOAA Laboratory for Satellite Altimetry) has been elected Chair of the TSCOM and Dr Bruce Goleby (Geoscience Australia) as Vice Chair. Karen takes over as Chair from Dr Walter Smith (US NOAA Laboratory for Satellite Altimetry) who has stepped down after ten years service in this role. GEBCO extends its thanks and gratitude to Walter for his leadership of TSCOM and its work during this time.

GEBCO consists of an international group of experts who work on the development of a range of bathymetric data sets and data products with the aim of providing the most authoritative publicly-available bathymetry for the world's oceans. It operates under the joint auspices of the International Hydrographic Organization (IHO) and the Intergovernmental Oceanographic Commission (IOC) (of UNESCO).

GEBCO's work is directed by a Guiding Committee, consisting of an equal number of representatives from both the IHO and IOC. Its work is supported by sub-committees: Technical Sub-Committee on Ocean Mapping (TSCOM); Sub-Committee on Regional Undersea Mapping (SCRUM) and Sub-Committee on Undersea Feature Names (SCUFN) plus ad hoc working groups. These committees and groups are made up of experts in many fields and from organisations from all around the world.

Welcome to a new member of the GEBCO Guiding Committee