The Nippon Foundation-GEBCO Seabed 2030 Project aims to facilitate the complete mapping of the ocean floor by the year 2030. It builds on over 100 years of GEBCO's history in global seafloor mapping. The Seabed 2030 Project was announced at the United Nations Ocean Conference in New York on 6 June 2017 as a collaborative project between GEBCO and the Nippon Foundation.

We are now seeking an experienced professional to lead and represent all aspects of the Seabed 2030 Project. This is a rolling three year position with right of renewal if mutually agreed.

Information on how to apply is available from the Seabed 2030 web site. The Closing date for applications is 5pm Friday, 25th August 2017 UT.

The role of the Seabed 2030 Project Director

The Project Director will lead the Seabed 2030 Project team, coordinate activities across five project centres, develop and execute a funding model that includes securing resources from external organizations and capital markets to expand the project and advocate for governments and other organisations to finance and carry out new seafloor mapping initiatives to map known gaps in seafloor bathymetric coverage.

Successful applicants will have proven experience in managing complex international projects and be skilled at coordinating culturally diverse groups of people and organisations. The Project Director will serve as the external face of the project, networking and partnering with key international marine programmes, industry, NGOs, academic institutions and government agencies while overseeing the implementation of a comprehensive marketing and communications strategy.

Further details are available from the Seabed 2030 web site.

In the opening address of the Forum for Future Ocean Floor Mapping in June 2016, Mr. Sasakawa, Chairman of The Nippon Foundation, set forth the initiative to partner with GEBCO to cooperatively work towards mapping 100% of the topography of the World Ocean floor by 2030.

This initiative led to the formulation of Seabed 2030, a global project within the IHO-IOC GEBCO framework with the focused goal of producing the definitive, high-resolution bathymetric map of the entire World Ocean.

This ambitious initiative is driven by a strong motivation to empower the world to make policy decisions, use the ocean sustainably and undertake scientific research based on detailed bathymetric information of the Earth’s seabed.

GEBCO's aim is to provide the most authoritative publicly-available bathymetry of the world's oceans. It operates under the joint auspices of the International Hydrographic Organization (IHO) and the Intergovernmental Oceanographic Commission (IOC) (of UNESCO).

The Seabed 2030 project builds on more than 100 years of GEBCO’s history in seafloor mapping and benefits from the human network of mapping capacity developed through The Nippon Foundation – GEBCO training project. As part of Seabed 2030, GEBCO will strengthen and expand its links and collaborations with international and regional bathymetric data collecting and mapping organisations in order to build an authoritative global bathymetric model. 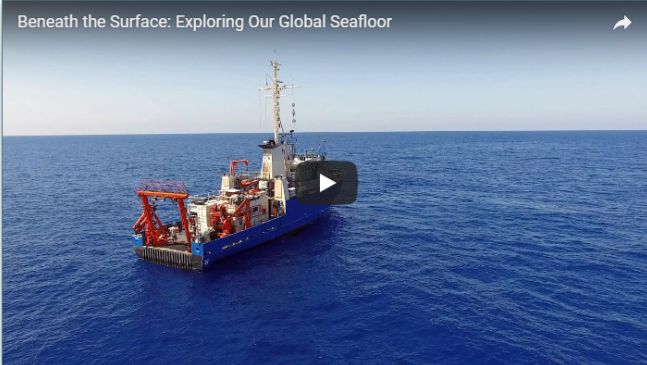 Beneath the Surface: Exploring Our Global Seafloor

Access a video from the Forum for Future Ocean Floor Mapping held in June 2016.