Traditionally, GEBCO's data sets and maps have shown the bathymetry of the deeper water regions of the world’s oceans – i.e. at depths of 200 m and deeper.

So that we can more accurately model the shape of the ocean floor in all areas and serve a wider user community, we have been working to improve our gridded bathymetric data sets in shallower water.

The bathymetry data held in the world wide coverage of Electronic Nautical Charts (ENCs), collectively produced by IHO Member States, has proven to be a valuable data source and are being used to significantly improve GEBCO’s bathymetric grids in shallow water regions.

Many Hydrographic Offices and hydrographic organizations have already contributed substantial amounts of shallow water bathymetry data for their coastal zones. Generally these are from ENCs in small scale 'General' and 'Coastal' navigational purpose bands. The data have resulted in significant improvements in the bathymetry for some shallow water areas and are helping GEBCO to produce a better generalized bathymetric model that seamlessly extends across oceans from shore to shore. 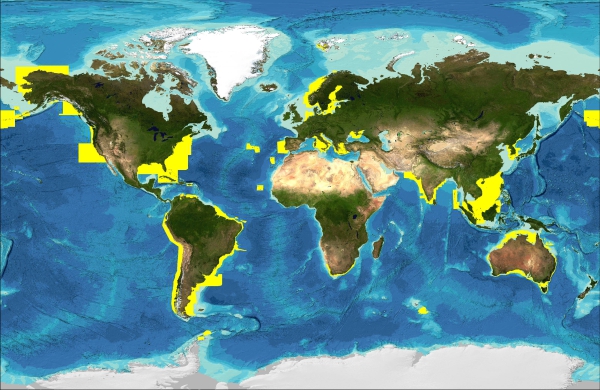 The following is a list of IHO Member States and organisations that have contributed shallow water bathymetric data to GEBCO.

How to contribute data

GEBCO is continually working to improve its bathymetric data sets and welcomes data contributions for all ocean regions. Further details are available on how to contribute data to help improve GEBCO’s grids.

Many of the ENC data sets for the above regions have already been incorporated into the GEBCO Grid.