The GEBCO_2014 Grid was released in December 2014. It includes new bathymetric compilations for a number of areas. The images below show the coverage of the source data sets included in the grid and illustrates some of the improvements seen in the GEBCO_2014 Grid compared to previous GEBCO grid, GEBCO_08.

Find out how to access the GEBCO_2014 Grid. Further details about this release can be found in the documentation that accompanies the data set (accessed from the British Oceanographic Data Centre).

The image below shows the coverage of the source data sets used to generate the GEBCO_2014 Grid.

Originally, the GEBCO global 30 arc-second grid was largely based on the SRTM30_plus (v5) data set and first released in 2009 as the GEBCO_08 Grid. The track coverage for this data set is shown in black. The latest GEBCO grid, GEBCO_2014, has been generated by updating this base grid with the data sets shown in the image below.

As shown in the image above, the GEBCO_2014 Grid has benefited from contributions from a number of regional mapping projects and bathymetric compilations. The images below compare the previous GEBCO grid, GEBCO_08, with the new release, GEBCO_2014, in some of these regional mapping areas.

The EMODnet DTMs contains 'holes' where high-resolution data sets are not available. Through a collaboration between GEBCO and the EMODnet bathymetry team, the 2013 version of the EMODnet grid and GEBCO grid have been merged giving a continuous data set with the 'holes' filled by the GEBCO grid.

This combined grid has been included in GEBCO_2014 and forms the basis of future EMODnet bathymetric grid development work.

Click on the images below to view plots showing the improvements that the EMODnet data set has made to the GEBCO_2014 Grid in selected areas. 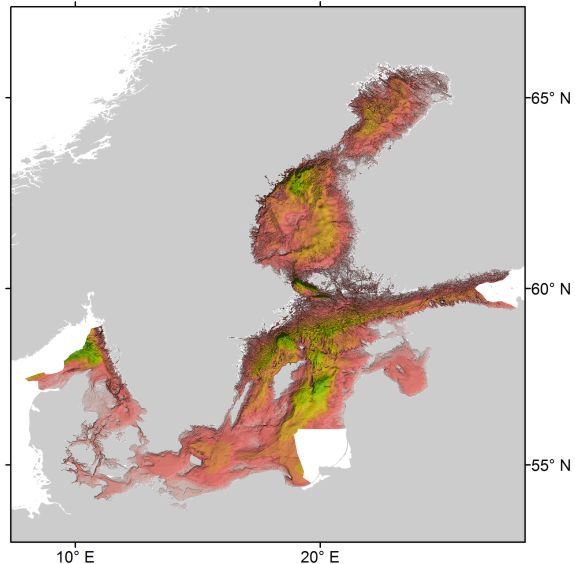 Data set information: The Baltic Sea Bathymetry Database is the result of an effort to generate and make available a bathymetric grid for the Baltic Sea region using data from Baltic Sea countries' national hydrographic offices under the umbrella of the Baltic Sea Hydrographic Commission. Further information about the development of the data set and the data sources used can be found at the above link.

Click on the image below to view a plot of the updated Baltic Sea region. 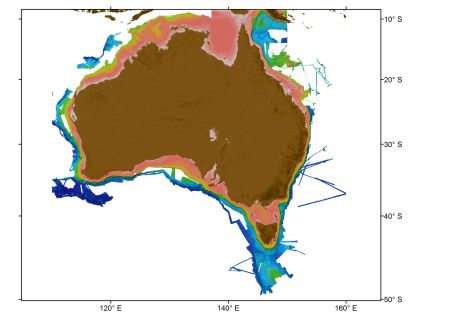 Supplied data set: The bathymetric portion of the grid has been developed from a number of data sources, including: multibeam data, fairsheets (1:250,000 Series), Laser Airborne Depth Sounder (LADS) data and the ETOPO2v2g bathymetric grid. The sections of the grid based on Multibeam, Fairsheets and LADS data sets, mainly in near shore regions, have been used to update the GEBCO grid. The coverage of the data set used to update GEBCO is shown in the above image.

Click on the images below to view plots of the updated areas around Australia and Tasmania. 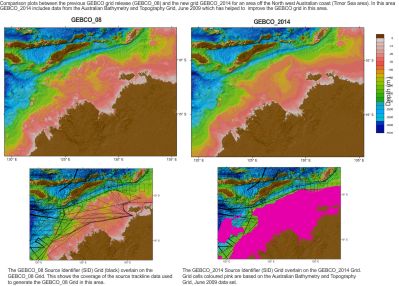 Supplied data set: The grid for this area was originally developed at 9 arc-second intervals and based on the following source data: multibeam data from the Japan Coast Guard, a pre-prepared 500m interval grid based on measured sounding data, J-EGG500 grid JODC-Expert Grid data for Geographic -500m and the GEBCO_08 Grid. Further details can be found in the documentation for the GEBCO_2014 Grid.

Click on the image below to view a plot of part of the updated Northwestern Pacific Ocean region.